On Tuesday I attended a talk put on by the Society of Typographic Arts and hosted by McGarryBowen in downtown Chicago. 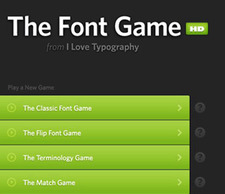 The first speaker was Justin Stahl, a designer and developer based in Chicago and known for a number of apps including The Typography Manual and The Font Game. He began by outlining the arc of progression behind successfully developing an app which he segmented into four phases: research, wireframes, design, and development.

A useful recommendation from Justin’s talk was, when researching a concept, to utilize Apple’s Human Interface Guidelines (HIG), a document we have on file here at Neoteric and use often. Also useful was the idea of both coding and designing an app at the same time. Developers can work strictly with the HIG tools to begin programming while the designer refines the overall look and feel. We sometimes use this construct (often known as the ‘agile method’ of development) when building complex sites but have yet to try it with app development.

The second speaker was John Bonadies, a designer from Champaign who – through Kickstarter – has an app in development which essentially turns your iPad into a virtual letterpress. John showcased the app which is about 80% complete and talked about the challenges that come with bringing a complex idea to fruition and how important it is, as a designer, to find a good programmer who can not only develop the end product, but also work with the designer to refine the app along the way. The app, called LetterMPress looks like a ton of fun and I’ll be sure to pick it up when it arrives in the store sometime in June.

To find out more about the LetterMPress check out the video below from Kickstarter: